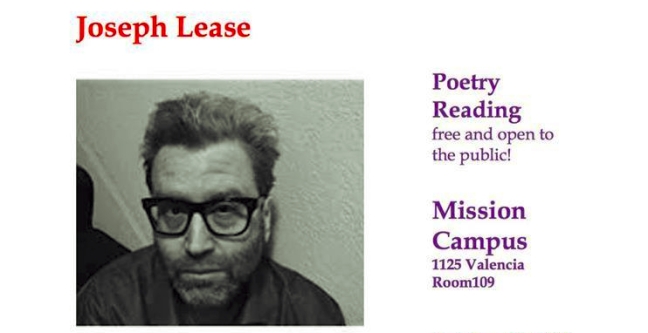 Join us tomorrow night at the Mission Campus at 6pm for a reading featuring Joseph Lease.

Of The Body Ghost, David Shapiro wrote: “When I was very young, my father a ‘skin doctor’ would show gleaming models of body parts at medical fairs. They frightened my sisters but they were also illuminations of a whole world. Joseph’s poems are like these terrifying wholes/holes. They travel into us. Joseph has been 2 making an American Buddhist poetry, and he is as maximalist as flesh and bone. He gives me the sensation that poetry is in gleaming hands, healing and grasping and letting go. He is the future of poetry.”