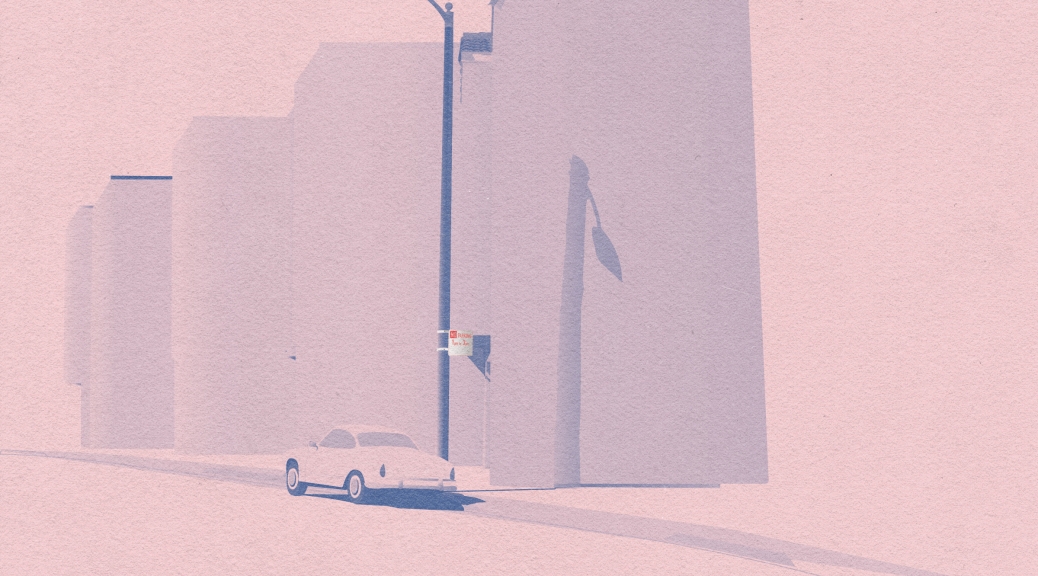 I went for taro,

a gull defended the cross

it perched on from

sulked. Do I call it

for yang, or remember

Jeffers, who wrote, “it is bitter earnestness

that makes beauty; the mind

Joshua Yule  has actively been producing artwork including print, screen printing, illustrations, and digital illustrations for the likes of many local Bay area bands for almost two decades. 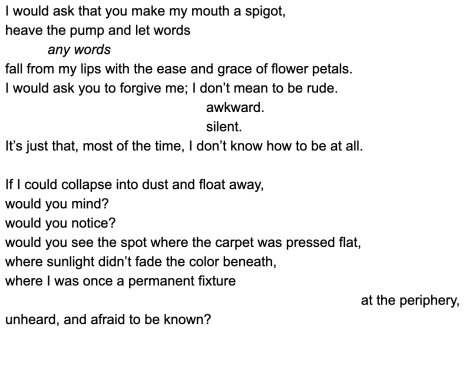 I received my English degree with a Spanish minor from CSU Stanislaus in Spring 2019, and I will complete my creative writing certificate at CCSF in Spring 2020. Writing is my passion, but I also dabble in drawing, painting, photography, and performance. My work has appeared in Penumbra Literary Magazine.

It’s Not A Saltshaker by Travis Yallup

Travis Yallup is a contemporary realist who lives and works in San Francisco. He has studied art at various colleges and universities over the past eleven years and has developed a preference for drawing and painting in a variety of mediums. His  focus usually comes from life, photos, and collages and he often draws an inspiration from influences such as Andrew Wyeth and Vija Celmins. 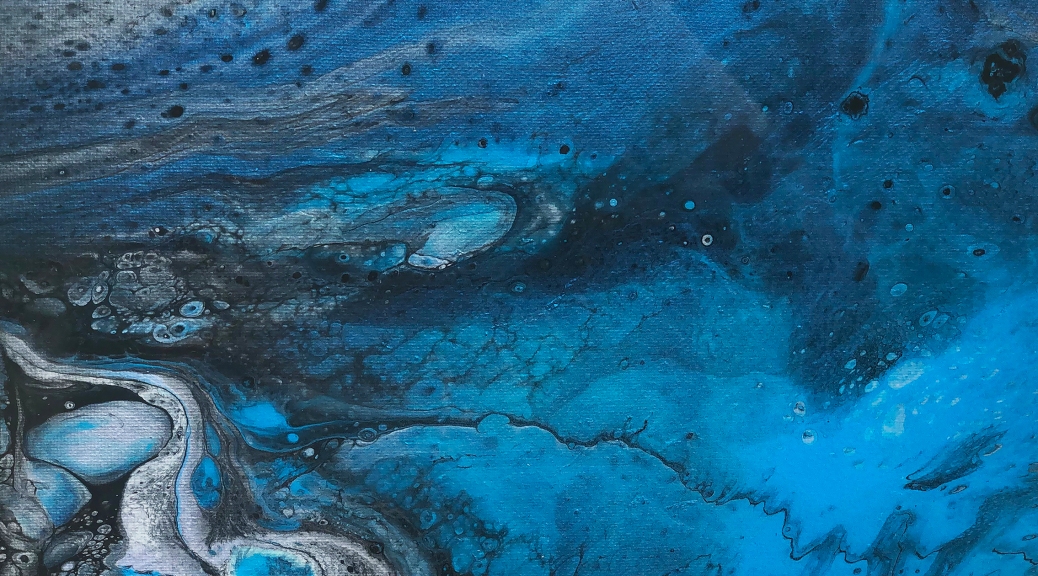 Proudly, he awakens his three youngest at dawn,
they’ll share eggs, herring and tea. Zeb,
his oldest won’t visit from his conscription
in Sanai for another 3 to 4 months while an opaque
gray of sadness clings to the walls
and his wife Sedja’s ashes sit above the makeshift
mantle, her lungs first, then her uterus
Metastasizing the entire family and her parents
now no longer allowed to travel
with the pedestrian crossing closed.

He remembers their weekly visits for groceries
and toilet paper, the store owner Elon, sat
with judgement like Ezra the Scribe
when he held her hand in the tight aisles
waiting in line for her medications,
no hair left under her khimar
yet he would smirk and mumble under his breath,
“see, they are weak, they even kill each other.”

His business was forcibly closed by decree,
he could no longer buy or sale supplies
to the Westbank with increased restrictions
on coastal fishing and the expanding tributary of walls
have assured him, it is forever. He’s still confused
that he no longer sees the love for humanity
his parents instilled in him from crib to classroom,
home to Sabbath, Mediterranean to Dead Sea.

He looks forward to his children’s sleepy eyes
and shuttering the windows for the night,
he will sip a small glass of Arak,
after their feet have lifted and are tucked
away quietly in the far bedroom. An array
of dog’s barking and movement of armored
vehicles can be heard in the distance.

He holds onto his resentments like springtime
buckets of rainwater near the Gaza Strip,
as the tattered Star of David flies solemnly
above and dangles tarnishing in 14k
around his neck. Everything that falls
from the sky like droplets of hate
are owned by the Promise
but his feelings are all his own.

He says, so long as they persist in hatred
of the other and the insistence on maintaining
the seclusion, they are helping to create
a group of people that do not belong
to either one of the two nations
and love is forbidden alike.

Buckets of Rainwater by Vincent Calvarese

Vincent Calvarese is a writer and visual artist born and raised in the San Francisco Bay Area. In his latest work, Buckets of Rainwater, he gives voice to those in the Middle East battling the multiplying walls of hate.  After 32 years in San Francisco, he recently relocated to the Coachella Valley. 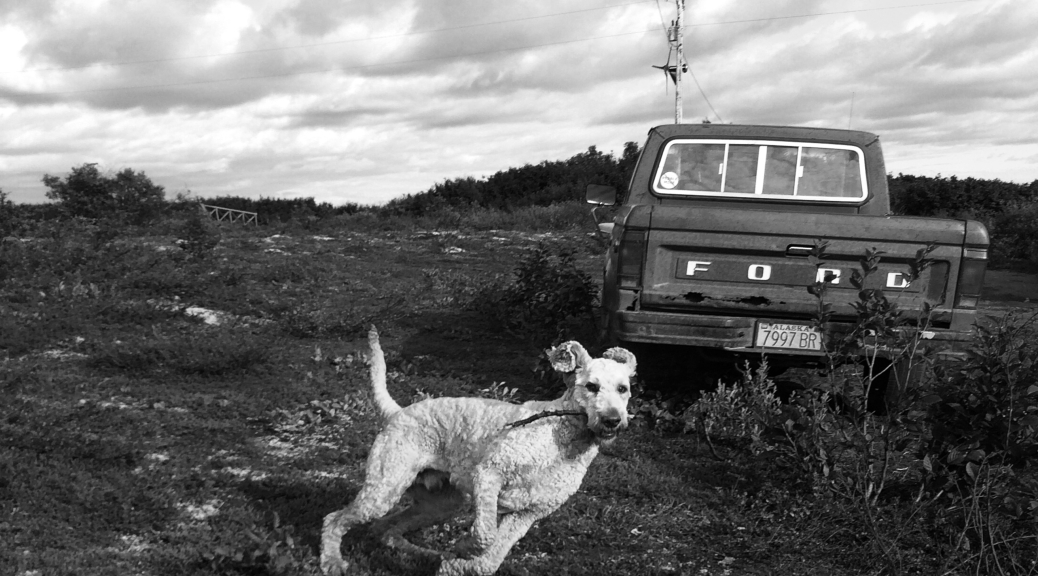 The stairs to the backyard are dusty with un-swept dog hair. They cling to my footsteps as I run by; the need to follow still hiding in their genes. The chickens peck holes into the sweet nasturtium caging them in. An unlucky worm is found between stalks and chicken wire. The path to the shed shows signs of neglect: unattended plants causing havoc, a meandering line of clovers that peek through cracks in the bricks we placed last spring. I shove the swollen door, the rain has been thick. Inside your old shed: fallen coins from your pockets forgotten on the floor, a lucky bamboo shoot, its small green leaf not yet wilted. I linger in the doorway. The chicken scrapes her heels into the ground.

The strawberries grow
wild in the dirt next to me.
Their sweetness untamed.

Our Backyard After You Left by Valeri Alemania

Isabella Antenucci is an artist, writer and blue collar worker that lives in the San Francisco Bay Area.

Rest in power to the 176 beautiful human beings that were taken from Mother Earthtoo quickly, on January 8, 2020, shortly after taking off from Tehran International Airport for Ukraine. Thinking of all of you, your family, and your loved ones.

People in Iran will literally give you the clothes off their back. No exaggeration.
“Ghabel nadareh.” [It’s no big deal.]
“Biya, tokhmeh bokhor.” [Come here, eat some nuts.]
“Gherdoo barat shekastam, biya azizeh delam.” [I’ve broken some walnuts for you to eat, come here my darling.]
You are a guest in Iran, always.
Iranians compete for who pays the bill. Fights ensue. Names called. From the outside, it looks like a misunderstanding, a fight, even. For us, it’s a deep show of care. We call it “Taarof”.
When Iranians walk in front of you, they will always, all ways, apologize.
“Goal poshtooroo nadareh.” [A flower has no front or back.]
The hospitality, the poetic warmth, the generosity; engrained into the very fabric of the culture. Neighbors know one another here. They talk all the time. A guest stops by my grandfather’s house, just to say hello—brings flowers, sweets, dinner—salam, chetori? hello, how are you? I heard your grand-daughter was in town. Bebakhsheed keh zoodtar nayamadam. My apologies for not stopping by sooner. I wish you health, happiness and joy.
“Hameen.” [That’s all.]
For me, it’s everything.
I remember my Haji Baba crying
As I picked up my suitcase and headed for the door
Tehran airport the final destination
He tells me
Bebaksheed ageh keh vaghteh khoobi nadaashtee.
I’m sorry if you didn’t have a good time.
Tears pool quickly fall from his eyes
Hot raindrops
I kneel down, one knee, embrace him
Feel the hot mass
Azizam, cherah meegee bebasheed? Kheili kosh gozasht eenja.
My dear, why are you apologizing? I had a wonderful time here.
He tells me “Azizeh delam, areh, areh, areh.” [My darling, yes, yes, yes.]

For My Iranians by Ladi Khoddam-Khorasani

Ladan (Ladi) Khoddam-Khorasani, known by her friends and loved ones as Ladi, is an Iranian American womxn poet, story-teller, advocate, and life-long student. Ladi’s writing is mostly fueled by mint and cardamom coffee, dark chocolate, and spontaneous dance parties in her kitchen. Her writing focuses on the power of the human spirit; kindness as a necessary ingredient for intentional living; and the resiliency of community. She currently works as a public health advocate for youth experiencing homelessness in San Francisco, and is always looking for ways to connect community to the healing power of the arts.  You can find her at IG: ladifuggindadi and/or Twitter: lkhoddam.

Don’t let your children study abroad,
Don’t let them go overseas.
The things that they learn in the rest of the world
Are things that can’t be unseen.
Don’t let them work in a foreign concern,
Discourage that class in Chinese.
They’ll never get work at the Credit Union,
They might also bring back ideas.
Why should we send our youth outward,
When we have everything you could want here?
Healthcare and cars, jobs and backyards,
But don’t you dare scratch the veneer.

Stephanie Johnson has recently completed an AA degree in English Literature at CCSF. She has been working overseas for the last two decades and is enjoying the challenge of trying to re-integrate into a society that has changed dramatically. She hopes to capture her feelings about this in her writing.

Ana Lazaro is a San Francisco based artist. She considers herself a world citizen and has, since childhood, had a passion for capturing moods and emotions through her portraiture. Ana’s current work is inspired by her desire to celebrate empowered women making a difference across the globe.

Every year, Forum staff looks forward to receiving the printed issue. Despite the potentially wider reach of online publication, the printed edition translates the individual visions of the contributors, literary and visual art staff, and the visual media team into a collective work of art.
As of August 9th, we still do not know when the Visual Media team will have access to the printing facilities we need, and as soon as we have more information to share, we will post it here. We will also notify contributors directly when the Spring 2020 print edition is available.

To request your contributor copy or preorder additional copies, please fill out this form:

You may also use this form if you are seeking back issues of Forum, though we will not be able to fulfill your request until we have access to CCSF facilities.