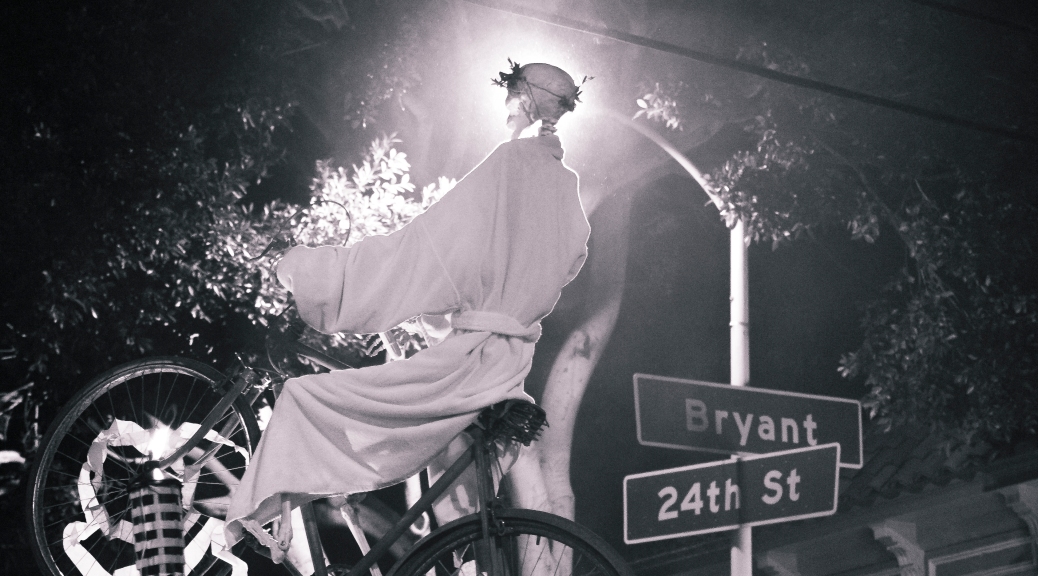 This night, like every night, Angelina stands at her kitchen table in the light of a bare bulb, cutting leftover bread into small squares. Her long black hair is neatly wrapped in a bun, like a little hat on the top of her head. A silver cross, hanging from the brown leather neck, glimmers with her rhythm. She drinks a cup of yerba buena tea, fighting off a cold so as to not let her friends down by missing her morning appointment. She places the bread into an old shoe box, using the care of a mother laying her children to sleep. She goes to the bedroom where she will rest the tired body, free her mind of the barriers of flesh for the night.

She rises with the sun and emerges from her once-white studio apartment into the noise and decay that exists even in the dawn of the city. She wears a pink skirt bought at a church bazaar and a light blue sweater she found hanging from the fire hydrant around the corner. Under her right arm is the shoe box of bread which is kept closed with a rubber band.

She walks down the street, passing corners where boys live and die selling highs to those who have only known lows, passing sleeping drifters, the broken glass of windows and beer bottles, the sticky thickness of drying urine mixed with cool morning breeze, the cry of a baby, the roar of a bus, until she arrives at Our Lady Of Grace, crosses herself and then the playground between the church and the classrooms to the clogged water fountain where pigeons drink and bathe their dusty feathers.

A couple of feet from the fountain she slows and leans against a flowering plum. Its dark purple trunk, only inches taller and slightly sturdier than Angelina, bends under the weight of her years. She looks around the playground at the tire swings and wooden jungle gym and at the tile roof of the church. “Pajaritos.” She claps her hands twice. “Breakfast, el desayuno. Angelina’s here.” She slides the rubber band off the box and onto her wrist and sets the lid on the cracked earth at the base of the tree. A few pigeons fly to Angelina and land at her feet. She takes a handful of cubed bread and broadcasts it in a sweeping arc. The birds peck at the bread, bobbing up and down as if bowing in appreciation of her generosity. Now others fly down from the church roof and join in the meal.

When she was six, her mother brought her to the capital to see the main cathedral. It was so large and beautiful. The great stones! And the ceiling was so high it seemed to reach to heaven. At the plaza in front of the cathedral her mother bought a small bag of seeds from a skinny boy, so Angelina could feed the pigeons. They looked funny to her, clucking and hobbling around, their little heads tilting side to side. Her mother explained that the birds were the spirits of people who were searching for something they had lost, and after they found it, they could spread their wings and fly to heaven.

Now, over fifty years later, Angelina feeds these grey creatures, these wandering souls, wondering what it could be they have lost. Self-respect, fortunes, a leg, or are they like her and lost their country?

She thinks of times past, before her husband’s plan of coming to the United States and making a new life, before their long journey from Guatemala, to Mexico, to The Border, before encounters with opportunistic coyotes and power wielding border guards. The same guards who beat her Antonio and left her without a husband in a strange new land. She misses the open-air markets, orchids growing on roadside trees, the abandoned temples of her great ancestors, the song of the marimba.

But most of all she misses her husband, a stubborn man, whose head was full of crazy ideas and dreams. None of which she understood until now. Like the times he spoke of organizing the people to overthrow the government. Or being a bird. He had always wanted to be a bird. “So I can fly above cities of tyranny and corruption with a freedom and grace I have never known,” he had said.

Angelina casts another handful from the shoe box. Bits of bread drop to the pavement like tears. She looks at the feeding birds. “What are you looking for, m’ijitos?” A pigeon with a red thread tangled around one of its legs lifts its head from the crumbs and turns a curious eye to her. Angelina looks at the thread and wishes she were a caterpillar. If I were the size of a caterpillar, she thinks, I would wrap my little body around that thread and be taken high into the clouds. She looks back at the pigeon who is now busy pecking at a piece of crust.

“I’m looking for my husband,” Angelina tells the bird. “He’s been gone for years now and the sad thing is—” her words are interrupted by the first gun shot of the day. Whether the shot came from the gun of a police officer, a gang member, or an angry husband, she doesn’t know. It was blocks away, though, and Angelina knows there is no cause for alarm at this distance, but the pigeons scatter. She looks to the sky and watches grey bodies disperse against blue. “The sad thing is,” she continues, “we never got to say goodbye.”

She remembers the crack of a nightstick against her Antonio’s head and the flutter of wings, the frozen fear on his face, the look of mad pleasure in the eyes of the border guards, and running – so much running. Running from the fat-bellied laugh of corrupt politicians, the emptiness of poverty, the back-breaking work of cotton and coffee plantations, cleaning the dirty houses of rich light-skinned women, and the cold certainty of hot bullets. Running to a better life in a country built on the gold and bones of her ancestors, the acres of lettuce and tomatoes, to garment sweat shops, to cleaning the homes of the rich, to the emptiness of poverty, the worries of a widow. Nothing better than before. Memories and pigeons, her only company.

“Come back,” she looks at the terra cotta tiled roof of Our Lady of Grace. “Come back.” Feathers rustle softly behind her. As she turns to see, a pigeon flies past her like a memory of forgotten dreams and rests on the green copper cross at the top of the steeple. They gaze at each other, eyes fixed in silence. She opens here mouth and a warm whisper is carried in the light breeze. “Good bye.” The breeze fills the bird’s wings and it rises – above Angelina and the playground, above the corner stores and rotting apartments, upward, past the humming power lines, beyond shouts of pain and despair, into the blanket of sapphire sky, and disappears behind a soft white cloud.

The tide of Angelina’s soul surges in her eyes. She sighs and looks at the crumbs scattered across the pathway, then bends over and picks up the pieces and places them in the shoe box, saving them for tomorrow. She walks the path between the church and the school towards the street. A car pulls up and a young girl with long hair the color of chestnuts jumps out yelling, “Thank you, Mommy,” and runs to the classrooms. Angelina smiles and continues walking, wondering how much it will cost to fly home.

Eric Imperiale
Eric is a proud graduate of City College who believes in the power of words to not only entertain, but to express, heal, and affect change.

Meredith Brown
Meredith Brown is a CCSF student who seeks to interpret her world through printmaking, photography, writing, and interior design.

One thought on “Libertad – Eric Imperiale”