The couple on the couch squints
at us, points an index finger
back and forth
morena at mi pareja
güera at her mother
güera morena yo les dije, es la hija de mi hermano

tía Anita frustrated
the daughter
of my brother who is not here
Mi hermano, sí, moreno

You feel they want to turn
to me if they could
and you are no response
we are all seated in our place
eating tiny white cakes
and a candle for tia’s
birth; feliz cumpleanos
sing Mañanitas
Beto y Maricela on their tiny space
heads moving from side to side
from Mascota, Pueblita of familia no one says where we are from
Mascota of the mountains I told you, she is the daughter

Who are you? they want to say to me.

As we talk about where we come from

am only Jewish
And the cousin of tu tía on the couch
without missing the bite going into his mouth
que lastima sobre el holocausto
Yes, too bad
because there is no time
to search for other
phrases
Unless sitting on my stiff backed chair
eating my piece of cake about to fall
off the spoon

I say si, estamos juntas como maridos
pero diferente
I could take my beloved
across the patio below
with children and forgotten
toys, away from pristine crystal and lace
because we are together
but not really a married couple

so how can we fit this into idle afternoon conversation? 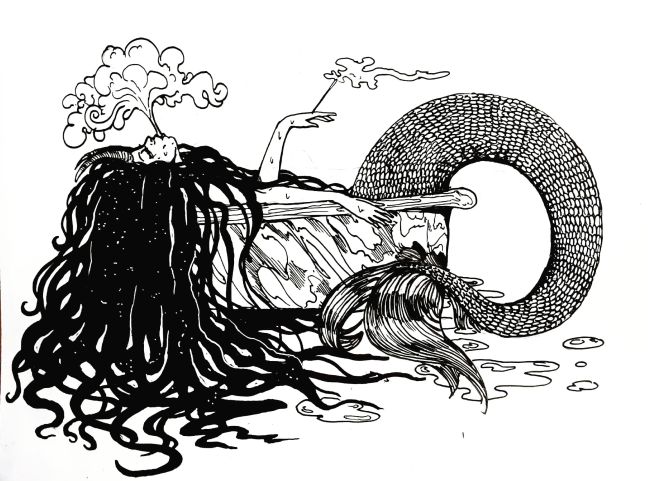 CCSF student, Bay Area born and Tijuana-raised, Spitblossoms is a visual artist and successful musician who has always found joy and meaning in realizing his artistic visions and sharing with a community of artists. For Spitblossoms, art is a meditation, release, source of pride and sustenance that helps him perfect his vision, overcome hardship, and continue to push forward to achieve his goals and dreams.